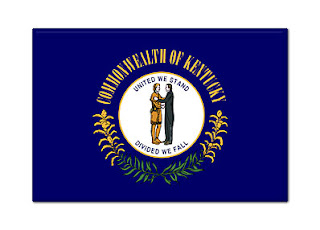 Kentucky was the first region west of the Allegheny Mountains to be settled by American pioneers. The region was part of Virginia until statehood was granted. The state has the greatest length of navigable waterways and streams in the contiguous United States; and the two largest man-made lakes east of the Mississippi River. Kentucky shares a border with seven states (care to name them?), only Missouri and Tennessee border more states (8). It is the only US state to be bordered by three rivers.

The Bluegrass State is home to the Kentucky Derby, the first race of horse racing's Triple Crown. The Derby is traditionally run the first Saturday in May.

Although Illinois is known as the "Land of Lincoln," Kentucky is the birthplace of Abraham Lincoln, 16th President of the United States. While not born in Kentucky, Zachary Taylor was raised in Kentucky.

Currently, the Governor of Kentucky is Steve Beshear, a Democrat. Both of the Senators from Kentucky are Republicans, Senate Minority Leader Mitch McConnell and Senator Rand Paul, son of Ron Paul, the Representative and presidential candidate. There are six members of the House Delegation, 4 Republicans and 2 Democrats.
Facts
Links

Prominent Kentuckians (here's a few lists to peruse, one, two, and three)

These are great, but now you're talking about my state. The Derby is the first SATURDAY in May, not Sunday. BTW - it's the oldest, continually run sporting event in the US behind. . . wait for it. . . The Westminster Kennel Club Dog show. And you didn't mention the best part about KY - Bourbon!
Great Job, keep'em coming.

C - is that a compliment?

MJM - A gross oversight on my part. I have amended my error. The bourbon thing, sorry, I am not a brown liquor aficionado.