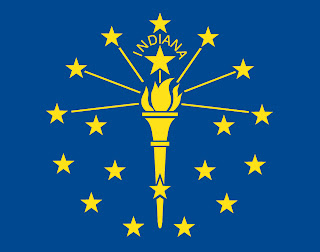 We have arrived at the "Crossroads of America," Indiana.  This post goes up at a time when there is about to be a lot of noise coming out of the Indianapolis Motor Speedway.  It's time for time trials in advance of the Indy 500, which is traditionally run on the Sunday of Memorial Day Weekend.  For me, one of the highlights of watching the race is the pre-game festivities, with Jim Nabors singing "Back Home Again in Indiana."  Unfortunately, Jim Nabors will not be able to sing this year in person - he is scheduled for heart surgery over Memorial Day weekend.  Enjoy the video below of a previous appearance.

Indiana is also rich with sports history, specifically high school basketball.  While James Naismith "invented" basketball in Springfield, Massachusetts in 1891, when he visited Indiana in 1925 and witnessed screaming crowds watching a game, he later wrote, "Basketball really had its origin in Indiana, which remains the center of the sport."  The movie "Hoosiers" adds to that lore.

The "Indian Land" was created as the territory of Indiana out of the Northwest Territory in 1800 and became a state sixteen years later.  President William Henry Harrison (our 31 day President, 1841) was named territorial governor of Indiana.  Ten years later, Harrison led forces against the Shawnee Chief Tecumseh to victory at the Battle of Tippecanoe.  The victory propelled Harrison to the Presidency in 1840.

The current Governor of Indiana is Republican Mitch Daniels, who is not running for President and finds himself constantly saying he is not going to be Mitt Romney's Vice President. Both of Indiana's Senators are currently Republicans, at least for the moment.  Although he was in the Senate for ten years (1989-1999), Dan Coats' return in 2011makes him the junior Senator for Indiana. Richard Lugar is the senior Senator and lost his primary last week and with it, his seat and his status as the most senior Republican in the Senate.  There is a good chance the Democrats will pick up this seat in November, Congressman Joe Donnelly is running for the upper house and has a good chance.  There are nine members of the Indiana Congressional delegation, three Democrats and six Republicans.
Facts


Prominent Indianans (here's a few lists to peruse, one and two)

Posted by Brave Astronaut at 8:06 PM