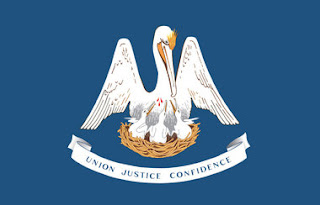 Our next state is named for French King Louis XIV (the Sun King).  It is the only state in the union that is divided into Parishes, not counties.  It was part of the Louisiana Purchase, which when completed in 1803, doubled the size of the United States.  It also gave control of the Mississippi River to the United States.

On Aug. 29, 2005, less than two weeks after the Brave Astronaut had visited the state for a conference, Louisiana was hit by Hurricane Katrina, devastating New Orleans, and killing hundreds elsewhere in the state, particularly in the parishes of Jefferson and St. Bernard. Federal and local officials were widely criticized for their slow and inadequate response to the initial disaster and subsequent recovery programs.  Even today, the city of New Orleans and the state continue to recover.

The current Governor of Louisiana is Republican Bobby Jindal.  Jindal, an Indian-American was on John McCain's short list for Vice President and is rumored to be on Romney's short list as well.  The Senators for the state are Democrat Mary Landrieu and Republican David Vitter.  The Louisiana Congressional delegation contains seven members, all but one are Republicans.
Facts
Links
Prominent Louisianans (here's a few lists to peruse, one and two)

Posted by Brave Astronaut at 9:05 PM