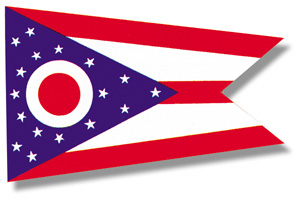 We have arrived at the seventeenth state to join the Union, the Buckeye State, Ohio.  You will note in the picture above the unique shape of the flag of Ohio. It is the only one of the 50 states flags that is not rectangular.  In fact, it is not known as a flag at all, its official definition is a burgee.  The name "Ohio" is an Iroquois word meaning "good river."  It may be noted that while the Ohio River borders the state - the river itself is "owned" by Kentucky and West Virginia.

Ohio is the first state admitted to the Union that was part of the Northwest Territory (which comprised what would become six different states - go ahead name them) under the Northwest Ordinance.  While it was granted statehood in 1803 - it was learned in 1953 that Congress never passed a resolution admitting the state.  A resolution was proposed by Ohio Congressman George Bender granting retroactive statehood.  President Eisenhower signed the resolution during the 150th anniversary of Ohio's admission.

Ohio is very popular for tourism.  The Football Hall of Fame is found in the state, in Canton.  The Rock and Roll Hall of Fame is in Cleveland, and Brave Astronaut does have a thing for roller coasters so this place is certainly on my bucket list.

As mentioned in an earlier post, the State of Ohio has produced a good number of Presidents (it is also known as the Mother of the Presidency).  The Presidents noted below were all born in Ohio.  William Henry Harrison was born in Virginia, but spent most of his life in Ohio and is also buried there.
Unfortunately three of them died in office.

The current Governor of Ohio is former Republican Congressman John Kasich.  Ohio's Senators are Sherrod Brown, a Democrat and Rob Portman, a Republican.  Portman is rumored to be on the short list to be Mitt Romney's choice as the vice presidential nominee. The Ohio Congressional delegation contains eighteen members, 5 Democrats and 13 Republicans, including the current Speaker of the House, John Boehner.
Facts
Links

Prominent Ohioans or "Buckeyes" (here's a few lists to peruse, one and two)

I was looking forward to this post - Thanks for the shout-outs! :)

I will say that Harvard on the Hocking has probably the prettiest campus of all the schools in the state. (Take a tour.)

As I was researching something else for work, I came across my new favorite site: Ohio's Heritage Northeast, which provides access to "digital treasures form Northeast Ohio's libraries and archives." Swoon!

Or "from Northeast Ohio's libraries and archives" -- I got distracted with finding my street on this 1915 map of Akron and forgot to double-check for typos. Doh!

Amy - I knew you'd have something to say.