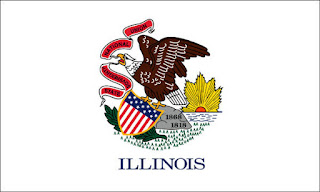 Illinois is the state that is smack in the middle of the rest of the states when it comes to size.  It is the twenty-fifth most extensive state - while it is the fifth most populous state in the Union.  It is of course, home to the Windy City, Sweet Home Chicago.  The founding of Chicago in 1830 (more than ten years after Illinois became a state) owes itself to settlers finding one of the few natural harbors along Lake Michigan, in the Chicago River.  Illinois was also part of the vast Northwest Territory.

Sports is very important to Illinois, more specifically Chicago.  Baseball is well represented with the Chicago Cubs and the Chicago White Sox.  The Chicago Bulls are a fixture of the NBA and the Chicago Blackhawks are one of the original six teams of the NHL.  Of course, there are also the NFL's Da Bahrs.

Ronald Reagan was the only President born in Illinois (Tampico), but three others were elected President from the state of Illinois.  Reagan had been Governor of California and a resident of the Golden State when elected.  Abraham Lincoln, Ulysses Grant and of course, Barack Obama, were elected as residents of the State of Illinois.  The Abraham Lincoln Presidential Library in Springfield is the largest presidential library in the United States.

In the history of the United States Senate - only six African Americans have served in the Senate.  Half of them have been from Illinois - Carol Moseley Braun, Barack Obama, and Roland Burris.  There have been two families that have dominated politics in Illinois:  the Stevensons and the Daleys.

The current Governor of Illinois is Democrat Pat Quinn, who succeeded Rod Blagojevich, who got himself into some troubles over Barack Obama's Senate seat, when Obama was elected President in 2008. The Senators for Illinois are split, one Republican, Mark Kirk (who is the successor to Barack Obama's seat) and one Democrat, Richard Durbin. Durbin is also the Assistant Majority Leader in the Senate.  There are nineteen members in the Illinois Congressional delegation, eleven Republicans and eight Democrats.
Facts
Links
Prominent Illinoisans (here's a few lists to peruse, one and two)

Posted by Brave Astronaut at 10:08 PM

Well, Abe is also an actor, so maybe.