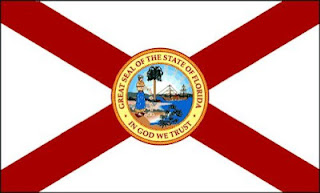 Florida was "discovered" by Juan Ponce deLeon in his quest for the Fountain of Youth.  He claimed the land for Spain in 1513.  The city of St. Augustine was founded in 1565, making it the oldest permanent city in the United States.  About 300 years later the territory was sold to the United States by Spain.  As a peninsula, Florida has the longest coastline of all the contiguous states (approx. 1350 miles) - it is also the only state to border both the Atlantic Ocean and the Gulf of Mexico.

Until the National Football League granted the city of Miami the Dolphins in 1966, the state of Florida had no professional sports, with the exception of professional baseball's spring training.  The Philadelphia Phillies started the practice in 1899, when the team trained in Jacksonville.  The state now boasts three NFL Teams, two MLB teams, two NBA teams, and two NHL teams.  Florida is also the home for the headquarters of NASCAR.

Tourism drives the states economy - with millions of Americans and visitors from around the world coming to the central part of the state to try on mouse ears and to "have a magical day!"  There is also a new destination in the state which is on my list to visit.  Florida is also home to half of the nation's space program with the facilities at Cape Canaveral / Kennedy Space Center.

The current Governor of Florida is Rick Scott, a Republican. Florida's Senators are split, Republican Marco Rubio, who is on Mitt Romney's short list to run as Vice President and Democrat Bill Nelson, who is being targeted this year, but should survive.  There are 25 members in the Florida Congressional delegation, 6 Democrats and 19 Republicans.
Facts
Links
Prominent Floridians- (here's a few lists to peruse, one and two)

Posted by Brave Astronaut at 9:29 PM

Well it is the state that everybody goes to die, isn't it? There can't be that many people who are actually from the state, right?