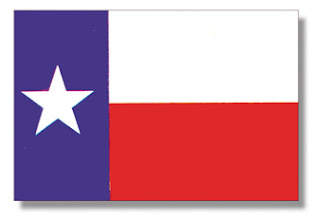 While Texas is most closely associated with cowboys and cattle - a colleague of the Brave Astronaut brought to my attention that Texas has a lot of wildlife to contend with.  After the recent flooding and heavy rains earlier this month in Houston, a woman came home to find a 6-foot alligator in her garage.  Read more here.

Texas has a very checkered Presidential History. Dwight David Eisenhower was born in Denison, Texas, but was raised in Kansas, which is where his Presidential Library is located.  There are of course the tragic events of November 22, 1963, which took place in Dallas.  Texas however is mostly about Lyndon.  Almost as big as the state itself, Lyndon Baines Johnson was born in Johnson City, Texas.  His Presidential Library may be found in the state capital, Austin.  Both of the Bushes are from the Northeast, born in Connecticut, but spent their adult years in Texas and both have established their libraries in Texas.  George HW's library is in College Station (on the campus of Texas A&M) and George W's  is located on the campus of Southern Methodist University near Dallas.

The current Governor of Texas is . . . wait, don't tell me . . .  it'll come to me . . . Oh, yeah, Rick Perry.  Oops. Both of the Senators from Texas are Republican - Kay Bailey Hutchinson, who is retiring at the end of this Senate term and John Cornyn. There are 32 members of the Texas Congressional delegation, 9 Democrats and 23 Republicans.
Facts
Links
Prominent Texans - (here's a few lists to peruse, one and two - the second list, from Wikipedia, is very extensive)

Posted by Brave Astronaut at 9:31 PM

Somehow, I think the 5th from the bottom is for me and your mom...