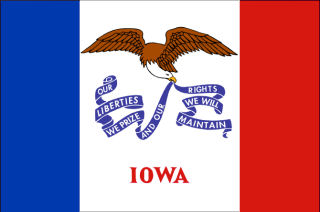 Iowa is often referred to as the "American Heartland" and the "Food Capital of the World" as a result of it's strong agricultural economy.  It is also known as one of the safest states in which to live.  Iowa is the only state in the Union of which its eastern and western borders are formed entirely by rivers (the Mississippi to the East and the Missouri to the West).

Prior to it becoming a territory of the US and then the 29th state, Iowa was part of New France and was within the confines of the Louisiana Purchase. During the US Civil War, Iowa supported the Union and proportionately, the state contributed more men to military service than any other state, north or south.  It sent more than 75,000 volunteers to the armed forces and over one-sixth were killed before the end of the war.

Politically, the state has national significance, as it holds the first electoral contest in the quadrennial presidential elections, the Iowa Caucuses.  The Hawkeye State has sent one of its own to the White House, the 31st President of the US, Herbert Hoover.  Hoover's Presidential Library is located in West Branch and is celebrating it's 50th year in 2012.

The current Governor of Iowa is Terry Branstad, a Republican. The Senators for Iowa are Republican Chuck Grassley and Democrat Tom Harkin. The Iowa Congressional delegation has five members, three Democrats and two Republicans.
Facts
Links
Prominent Iowans- (it appears there are some really smart people from Iowa - here's a few lists to peruse, one and two)

C - I knew you wouldn't be able to leave this post alone.