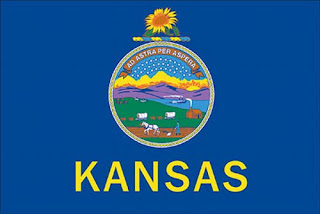 Spanish conquistadors and French explorers were the first Westerners to travel Kansas - Coronado in 1541 and Sieur de la Salle in 1682.  The land that became Kansas was ceded to Spain by France in 1763, briefly returned to France in 1800 and became part of the United States as part of the Louisiana Purchase in 1803.  In addition to Lewis and Clark, Zebulon Pike and Stephen H. Long also explored the region in the early 19th Century.  The first permanent settlements in Kansas were outposts, Fort Leavenworth (1827), Fort Scott (1842), and Fort Riley (1853), which were established to protect travelers along the Santa Fe and Oregon Trails.  In the years leading up to the Civil War, conflict between the pro- and anti-slavery forces earned the region the grim title of Bleeding Kansas.

Kansas is best known today as an agricultural force and the landscape features wheat fields, oil-well derricks, herds of cattle, and grain-storage elevators.  The state is also a leader in petroleum production and the nation's leading producer of helium. Wichita is one of the nation's leading aircraft-manufacturing centers, ranking first in production of private aircraft.

Kansas also boasts a presidential birthplace - Dwight Eisenhower was born in the state and his boyhood home and presidential library is located in Abilene.

The current Governor of  is Republican (and former Senator) Sam Brownback.  Both Senators for Kansas are Republicans, Jerry Moran (who is Jerry Moran?) and Pat Roberts as are the four members of the Congressional delegation.
Facts
Links
Prominent Kansans - (here's a few lists to peruse, one and two)

Posted by Brave Astronaut at 9:08 PM