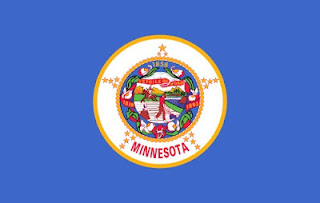 The North Star State was claimed for Louis XIV in 1679 after having been visited by several French explorers.  What is now eastern Minnesota became part of the United States after the Revolutionary War and the remainder following the Louisiana Purchase.  The state is the northernmost of the contiguous United States, with land extending above the 49th parallel.  The state produces more the three quarters of the country's iron ore.  The "Twin Cities" area of Minneapolis-St. Paul (the state's largest city and state capital, respectively) are the trade center of the Midwest and is the nation's third-largest trucking center.

The current Governor of Minnesota is Democrat Mark Dayton. Dayton is linked to one of the Republican/Democrat "royal families" - he was married to Senator Jay Rockefeller's (D-WV)sister, although he is currently divorced (from his second wife).  Both of the Senators for Minnesota are Democrats (the state has long been a democratic stronghold) - Al Franken (yes that Al Franken) and Amy Klobuchar. The Minnesota Congressional delegation has eight members and is evenly split between Democrats and Republicans.
Facts
Links
Prominent Minnesotans - (here's a few lists to peruse, one and two)

Posted by Brave Astronaut at 11:51 PM