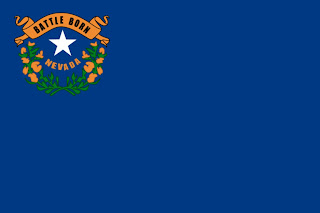 The battle born state, Nevada, came into the Union on Halloween 1864.  The territory was explored by trappers and traders, including Jedediah Smith and Peter Skene Ogden in the 1820s.  Twenty years later the area was explored by John C. Frémont and Kit Carson.  As a result of the Mexican War, the United States took control of the territory.  Eight days prior to the presidential election of 1864, statehood was granted to help ensure Abraham Lincoln's reelection. As it turned out, however, Lincoln and the Republicans won the election handily, and did not need Nevada's help.

Nevada owes much of its "fame" to the discovery of the Comstock Lode, the richest known U.S. silver deposit, in 1859.  The state's mines have produced large quantities of gold, silver, copper, lead, zinc, mercury, barite, and tungsten.  To add to the riches, oil was discovered in 1954. Gold now far exceeds all other minerals in value of production.

The other reason Nevada is well-known is for two industries, divorce and gambling. For many years, Reno and Las Vegas were the “divorce capitals of the nation.”  Nevada is still the gambling capital of the U.S. and a leading entertainment center. In 2009, 12.5% of Nevada’s general revenue came from gambling, which brought in $830 million.  For additional pleasure, prostitution is legal (in brothels) in the state, although confined to the more sparsely populated areas of the state.  It is specifically illegal by state law in the state's larger jurisdictions, which include Clark County (which contains Las Vegas), Washoe County (which contains Reno), and the independent city of Carson City.  Otherwise, it is legal in those counties which specifically vote to permit it. Prostitution is legal in parts of Nevada in licensed brothels, but only counties with populations under 400,000 residents have the option to legalize it. Although prostitution employs roughly 300 women as independent contractors, and not a major part of the Nevada economy, it is a very visible endeavor.

Nevada has by far the most hotel rooms per capita in the United States. The state is ranked just below California, Texas, Florida, and New York in total number of rooms, but those states have much larger populations. Nevada has one hotel room for every 14 residents, far above the national average of one hotel room per 67 residents.

Nevada is notable for being one of only two states to significantly expand its borders after admission to the Union. (The other is Missouri, which acquired additional territory in 1837 due to the Platte Purchase.) Nevada has the nation's 5th largest school district in the Clark County School District.

The current Governor of Nevada is Brian Sandoval (R).  The Senators for Nevada are split - Senate Majority Leader Harry Reid (D) and Dean Heller (R). The Nevada Congressional delegation has three members, one Democrat and two Republicans.
Facts
Links
Prominent Nevadans - (here's a few lists to peruse, one and two)

Posted by Brave Astronaut at 9:11 PM