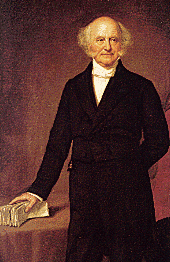 It is also the date on which the citizens of Texas, Ohio, Vermont, and are voting for president. And John McCain has secured enough delegates to win the Republican nomination. As for his opponent . . . will it be another from New York? Or a fresh face from Illinois.

Martin Van Buren, nicknamed "Old Kinderhook" for his home town,was our first president from the Empire State, New York. He came to power in the New York State political machine and was spotted by Andrew Jackson, who pulled him into his cabinet as, wait for it, yep, Secretary of State.

Conflicts grew between Van Buren and Jackson's Vice President, John C. Calhoun. Van Buren resigned, hoping to get others to resign from the cabinet, allowing Jackson to appoint a new cabinet. Jackson then tapped Van Buren to serve as Minister to Great Britain, but his appointment was denied by Calhoun and others in the Senate. Jackson got his revenge by making Van Buren his Vice President and then getting him elected as his successor.

In one of the first occasions of "It's the Economy, Stupid," Van Buren's administration was characterized primarily from the "Panic of 1837," which nearly put the country into a severe depression. The Panic had largely been caused as a result of the Second Bank Crisis, which had come out of the Jackson administration.

As the economic crisis worsened, the only other issue to affect Van Buren's tenure was the annexation of Texas. Van Buren opposed the annexation for it would have brought the slavery issue to the forefront again.

After being defeated in 1840, Van Buren returned to Lindenwald, his New York estate, to plan his return to the White House. He went to the convention in 1844 with a majority of the delegates but not a two-thirds majority. The nomination went instead to James K. Polk, of which we will hear more about in three weeks. Van Buren tried a third time for the presidency, running in 1848 as the Free Soil candidate. His candidacy and the votes he took in New York State likely gave the election to Zachary Taylor.

Posted by Brave Astronaut at 10:14 PM

To answer your trivia question, FDR.

Van Buren reminds me of Hoover, in terms of being stuck with a financial crisis that was really set in motion before his arrival. Bad timing. Shame.