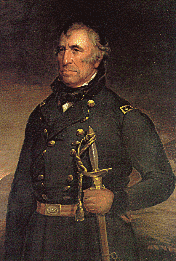 "Old Rough and Ready," so named because of his slovenly dress Zachary Taylor was the second president to die in office, although he did manage to hold on longer than the 31 days of poor William Henry Harrison. A career military man, although raised primarily in the South, he was a strong nationalist and was prepared to hold the Union together by armed force, if necessary.

The issue of slavery dominated Taylor's shortened term. At the time of his death the Compromise of 1850 was being negotiated in the US Congress.

The Facts
The Election of 1848
Trivia
Links

Posted by Brave Astronaut at 10:19 PM

Very interesting, as usual! Makes me think about how much our country's changed over the years...Gads, you'd hardly recognize her now!

And of course, with all her scars from what she has been through. Someone should call a battered women's hotline.