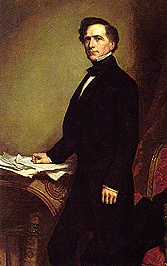 Unaware that we have had two presidents with the first name of Franklin? Well, Franklin Pierce is also our only president from New Hampshire. Pierce's administration started under a personal cloud for Pierce. Between the time he was elected in November and his inauguration, Pierce and his wife watched as their son was killed when the train they were riding on was wrecked. He had two other sons who had died previously. He entered the presidency wracked with grief.

Sectional crisis reared its ugly head again. While the Compromise of 1850 had given the nation a period of calm, Stephen A. Douglas of Illinois wanted to get a railroad built across the country. To facilitate that goal, Douglas proposed the Kansas-Nebraska Act. The passage of the act prompted people to pour into the newly formed territories to try and tip the majorities to make them into slave states, including John Brown and his minions. The fighting that broke out led to the designation of the Kansas territory as "Bleeding Kansas."

While Pierce managed to bring calm to the territories, the Democratic party denied him the nomination in 1856. He returned to New Hampshire and died in 1869, never returning to public office.

The Facts
The Election of 1852
Trivia
Links

Posted by Brave Astronaut at 10:20 PM

One of the best things about the current Bush presidency is that he may knock Pierce off the list of five worst presidents. And New Hampshirites will no longer have to live in shame. I've never been to either of his homes, but I drove through Rindge once...

We can but hope, I had no idea that Pierce was from New Hampshire or that he was the only president from that state! My best friend moved to New Hampshire a few decades ago. She told me a funny story about a NH resident who taped over the 'Live Free or Die' slogan on his license plate -- and was promptly arrested.

Anna - As I typed this post, I kept saying to myself, "You know that some dope mapmaker added an "N" to the town of Ridge, NH, because that just looks wrong."

Mary - And, as you will learn next week, Pierce was followed by the only president from Pennsylvania.

Gads, what a depressing life story...

Lana - They say being president is one of the loneliest jobs on earth. Think Frank was the first to think that? Did I mention that he died of cirroshsis from too much drinking?

Pierce was a fascinating tragic figure in the annals of American politics. By the way, I believe the story about him running over a woman is false. See my article
"Franklin Pierce Runs Over Woman- Not!". There are numerous other Pierce-related posts at my blog, Lugubrious Drollery.