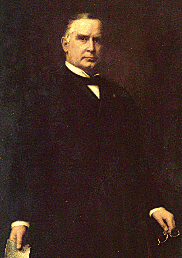 Our 25th President, William McKinley was the third to die at the hand of an assassin. McKinley was a well liked politician (if there is such an animal) and was elected to the House of Representatives, where he served 14 years and was twice elected Governor of Ohio.

After leaving office in 1896, he started running for the presidency at the urging of his friend and political adviser, Mark Hanna.

When he was elected President in 1892, he was swept into power by the largest margin of popular votes since 1872. A renown tariff expert, one of McKinley's first acts was to call Congress into special session to combat the waning Panic of 1893. He rammed through Congress, the highest tariff in history.

McKinley also led the nation into war, despite his desire to avoid war, he made a declaration of "neutral intervention" in 1898 before Congress who authorized war against Spain. The nation was largely pushed toward war through the efforts of newspaper publishers William Randolph Hearst and Joseph Pulitzer's "yellow journalism." McKinley pursued the war with great vigor, establishing a protectorate over Cuba and annexing the Philippines, Puerto Rico, and Guam after obliterating the Spanish around the globe. War became inevitable after the mysterious explosion of the USS Maine in Havana Harbor. The Spanish-American War featured the Assistant Secretary of the Navy, who went off to Cuba to lead his newly formed "Rough Riders" into battle. Of course, that man, Theodore Roosevelt will be featured here next week.

Foreign policy was where McKinley made his mark for, in addition to the Spanish-American War, he also engineered the annexation of Hawaii.

Shortly after his reelection in 1900, McKinley was in a receiving line at the Pan-American Exposition in Buffalo, New York, when he was approached by Leon Czolgosz, who shot McKinley twice at point blank range. The first bullet was discovered and removed, the second could not be located and doctors decided to leave it in. McKinley lingered for several days, even rallying at one point. But he succumbed to gangrene in the area of the second bullet. His last words are reported as "It is God's way, His will be done, not ours."

I believe McKinley's buried at Forest Lawn Cemetary in Buffalo, NY, too. I know ONE of the Presidents is. I've had the pleasure of visiting the place, which is actually rather wonderful.
BTW, did you know that one of Abraham Lincoln's decendants (also named Abe Lincoln,) is a blogger?
http://mybirdsblog.blogspot.com/
He takes some LOVELY photos of birds!
(Sorry for the recent absence--I was hard at work on a community project.)

While Forest Lawn has its share of political luminaries, the only president buried there is this one.

McKinley is definitely in Ohio, under the really big monument with his name on it.

One thing I remember reading about McKinley was that even people who didn't much care for his politics claimed he was one of the best, most devoted husbands they'd ever met. His wife was extremely neurotic and had frequent episodes, often during important functions. McKinley would apparently cover these up and do everything he could to help her.

And if he really did say that about his assassin, what a great guy.

There is evidently also part of the story that while Mrs. McKinley suffered from seizures, he would cover her face with a handkerchief so people would not have to see it. I don't know which way that goes, but there it is.

McKinley is another of those "what if" presidents. I think had he not been killed (and as a result TR never become president) this would have been a much, much different country.