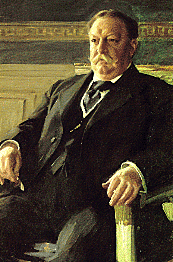 Our twenty-seventh president, William Howard Taft, remains our only president to become Chief Justice of the Supreme Court. It was there that Taft really made his contributions. He was not the best of politicians and received little credit for any successes of his presidential administration. I am sure that it didn't help to have served in the shadow of Teddy Roosevelt.

Taft really wanted to be on the Supreme Court and pursued his career in law with great vigor. However, his wife, Helen Herron Taft, had other ideas. She persuaded Taft to take a series of administrative appointments, including Governor / Administrator of the Philippines following the conclusion of the Spanish American War. He was tapped by Roosevelt to become Secretary of War and soon became the "heir apparent" to Roosevelt.

Taft disliked campaigning and won the election over William Jennings Bryan by using surrogates to calm the rival factions of the Republican Party. After his election, the Progressive Party blossomed with defections by liberal Republicans. As a result, in the 1912 election, Roosevelt, who had broken with Taft, bolted for the Progressive Party, which further divided the party, leading to the election of Woodrow Wilson (and there's next week's entry!).

During Taft's administration, success was made in getting two amendments sent to the states for ratification, a Federal income tax and direct election of Senators, which had been previously chosen by state legislatures. The new Interstate Commerce Commission regulated railroad rates along with the betterment of the Postal System.

After his defeat, he taught law at Yale Law School. In 1921, President Harding named Taft as the tenth Chief Justice of the Supreme Court, his greatest honor. He wrote of the position, which he held until his death, "I don't remember that I ever was President."