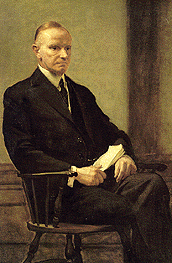 Our thirtieth President, John Calvin Coolidge (another President who did not use his first name - and a fact that had escaped me until I started writing this post!), came to the presidency upon the death of his predecessor, Warren Harding. In fact, when Coolidge was awakened at his home in Vermont and informed that he was now President, his father, a notary public, swore Coolidge in on the Coolidge family bible.

Born in Vermont, Coolidge rose to political power as a conservative Republican Governor of Massachusetts. Upon becoming President, he tried very hard to be successful at doing very little. Keeping the status quo and the prosperity being enjoyed by a majority of Americans led to his overwhelming victory in the election of 1924. Coolidge spent most of his presidency restoring America's faith in the office after the scandals of the Harding administration and left office with high popularity. "Silent Cal," as he was known, was amenable to a variety of "publicity stunts," allowing himself to be photographed in Indian headdresses and inviting groups to visit with him at the White House.

Coolidge married Grace Anna Goodhue, who was a perfect match for Coolidge. Outgoing and gregarious where he was reserved and reflective, he was very much in love with his wife. He wrote in his autobiography of Grace, "We thought we were made for each other. For almost a quarter of a century she has borne with my infirmities, and I have rejoiced in her graces." In 1924, shortly after receiving the Republican nomination, Coolidge suffered a personal tragedy. His son, Calvin, Jr., developed an infection and died suddenly. Coolidge later remarked that "when he died, the power and glory of the Presidency went with him."

The most notable foreign policy achievement of the Coolidge Administration was the passage of the Kellogg-Briand Pact, adopted in 1928 and ratified the next year. Signatories included the United States, the United Kingdom, France, Japan, Germany, and Italy. While it did not achieve its ultimate goal of outlawing war, war was renounced and it became the foundation for international law following World War II.

The Facts
The Election of 1924
Trivia
Links

Isn't he also the president known for being very frugal, eating leftovers in the White House kitchen and the like?

it is entirely possible - that good New England frugality.