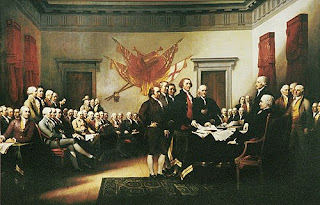 When in the course of human events it becomes necessary for one people to dissolve the political bands which have connected them with another and to assume among the powers of the earth, the separate and equal station to which the Laws of Nature and of Nature's God entitle them, a decent respect to the opinions of mankind requires that they should declare the causes which impel them to the separation . . .

We hold these truths to be self-evident, that all men are created equal, that they are endowed by their Creator with certain unalienable Rights, that among these are Life, Liberty and the pursuit of Happiness . . .

. . . And for the support of this Declaration, with a firm reliance on the protection of Divine Providence, we mutually pledge to each other our Lives, our Fortunes, and our sacred Honor.

Tomorrow, the United States will celebrate the 232nd anniversary of the signing of the Declaration of Independence. It will be celebrated with parades, cookouts, and of course, fireworks. I will celebrate it by watching one of my favorite movies, traveling to the National Archives to hear the words above read aloud, seeing my good friend OSG march in a parade, general recreating (there is to be some swimming and a backyard barbecue), and if LBA can take it, some fireworks.

My father also arrived today to visit. His birthday is tomorrow (he turns 79), although he was born in France, so the date did not mean anything until he arrived in this country when he was seven years old. But Happy Birthday to him! And Happy Birthday to America!
Posted by Brave Astronaut at 10:25 PM