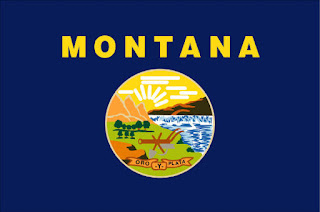 We have arrived at the third state included in the bill that admitted the two Dakotas and the state of Washington (spoiler alert: Washington is next week!).  The major Indian Wars (1867–1877) included the famous 1876 Battle of the Little Big Horn, better known as “Custer's Last Stand,” in which Cheyenne and Sioux defeated George A. Custer and more than 200 of his men in southeast Montana.  Here's an interesting fact, Montana and South Dakota are the only states to share a land border which is not traversed by a paved road.

Montana is the only one of the contiguous states that does not have a battleship named after it.  The planned Montana battleship class.  However the USS Montana and the sister ships were never built.  Of course, this makes me think of "I would like to have seen Montana."

The current Governor of Montana is Brian Schweitzer, a Democrat.  Both Senators for Montana are Democrats, although Jon Tester has quite the fight on his hands in his reelection.  The other Senator is Max Baucus. Another sparsely populated state, Montana also has only an At-Large Congressional delegate, Republican Dennis Rehberg.  In 1916, the state became the first to elect a woman to Congress and was one of the first states to give women voting rights.

Facts
Links
Prominent Montanans - (here's a few lists to peruse, one, two, and a third - hey, it's a big state)

Posted by Brave Astronaut at 9:23 PM