There's a great scene in Bill Cosby's "Himself" where he notes that he would sometimes wander about the house, with a look on his face, and exclaiming, "Where's your mother?"  Well, Mrs. BA was away overnight in New York, leaving me on my own with LBA and SoBA.  I'm usually in charge of the physical plant and operations.  Mrs. BA does personnel.  But I managed.  They're good boys.

Last night, which is usually reserved for brinner, we had "Mom's Beefaroni" which usually makes an appearance when Mrs. BA isn't around.  It's a man dish. I may have made sure they were in bed before 9 so I could be in front of the TV for the debate, too.  That's another thing that Mrs. BA doesn't watch - she wants to throw things at the TV.

I believe I noted that Mrs. BA and I recently painted the boys room.  I have to say I think it came out pretty nice.  It needs a little touch up here and there, but the long season of home improvement is underway.  We've been in the house 5 years now.  My goal(s) is to paint much of the interiors between now and next spring.  I'll keep you posted. 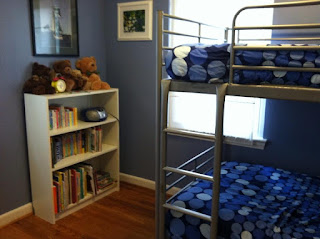 Posted by Brave Astronaut at 8:37 PM

Interesting post and thank you for sharing. There are things here that I did not think before.Thanks to cool such a position that is very well written, we will talk a lot of friends about it. Keep blogging. how to get rid of acne fast

This is really a nice and informative, containing all information and also has a great impact on the new artist. Thanks for sharing it.

Thanks for the great post. I have been visiting your site often and I find it really interesting and informative.

Thanks, to sharing this nice information, I really appreciate your thinking, & i will visit again for getting more updates.

Nice to share my love is wonderful to tell you that a healthy green gives you the best Organic vitamins, herbal remedies and organic supplements. They use all natural ingredients to create organic products.

I am happy when reading your blog with updated information! thanks alot and hope that you will post more site that are related to this site.