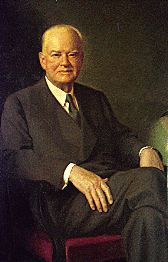 They say that events that take place during one's presidency will usually shape the man. In the case of Herbert Hoover, he really got the shaft. Hoover took office in March 1929 just seven months before the stock market crash and the onset of the Great Depression.

Hoover had graduated from Stanford University in California as a mining engineer. He married his college girlfriend, Lou Henry and they left the United States for China. While there, the Hoovers were caught up in the Boxer Rebellion in 1900. From China, the Hoovers went to Europe, where Germany soon declared war on France, marking the beginning of the First World War. The Hoovers spent the early days of the conflict helping to get Americans out of Europe and then working to feed Belgium, which had been overrun by the Germans. Once the United States entered the war, President Wilson appointed Hoover to head the Food Administration, which spent the days following the First World War, feeding those in need throughout Europe.

When he returned to the United States, Hoover served as Commerce Secretary for Presidents Harding and Coolidge and became the Republican presidential nominee in 1928. As President he spent his term trying to combat the Depression, but the crisis only deepened and Hoover quickly became the scapegoat. Hoover's presidency was further tarnished by his championing of the Smoot-Hawley Tariff Act and his sending Douglas MacArthur to remove the Bonus Army from Washington DC, where they had come to protest. He was badly defeated in 1932 by Franklin Roosevelt. In 1947, he was appointed by President Truman to head a commission to reorganize the Executive Branch. He was appointed to a similar position by President Eisenhower in 1953. Hoover lived for another thirty years, with the specter of the Depression forever hanging over him. When he died in 1964 at the age of ninety, he was the oldest surviving president, a record he held until Ronald Reagan passed him.

I had to do a 5 page report on the Hoove back in elementary school. It was very tedious & in retrospect, juvenile level books don't tell you NUTHIN'! (Maybe that's why it was so tedious...)

Lana - don't you wonder how we got anything done in school without the Internet?