It's just after 11:30 and I survived a night of being the sole parent in the house, with Mrs. BA off to spend her sister's birthday with her. Her husband very nicely threw her a surprise party. She will be back later this afternoon, likely in time for me to head to a pre-season Redskins game. I still don't have a date, so I don't know if I will go.

The other day, I received my "Food Surrender" package from Stinkypaw in Montreal. Here's a photo: 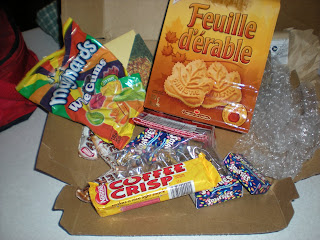 There were lots of good treats in the box, and the chocolate survived the multi-day trip across the border. LBA was very interested in the box and items were shared with him. But the Coffee Crisp (in the front of the photo) was reserved by me for my consumption. It may have been the best thing in the box! My reciprocal box is on its way to her and she should have it before long.

This morning, I was blessed to have both of my children sleep until almost 8:00. Although SoBA was up overnight, a quick bottle and a diaper change and he went right back to sleep. He woke up again at 6:00 but I brought him into bed with me and slept for another hour or so, until LBA came in. We watched a show (or two) before getting up to have some breakfast.

We watched a little of the Olympics. LBA was very interested in Women's Volleyball. SoBA is napping right now and LBA took a rest for a few minutes, allowing me to get this post done. Now it seems we are going to head outside for "a little baseball."

When is Mrs. BA coming home?
Posted by Brave Astronaut at 11:30 AM

Are those maple cookies I see??? *drooling like Homer Simpson*
Hang in there. Mrs. BA will be home before you know it. ;)

Coffee Crisps are the best! Happy to see everything survived the trip & customs!

Thanks for playing along for the "Food Surrender" - it's been "sweet"!

Paw meet Lana, Lana meet Paw. Paw, Lana used to live near Toronto and now lives in New Orleans. Perhaps you could arrange a trade of maple cookies for some cajun cuisine.