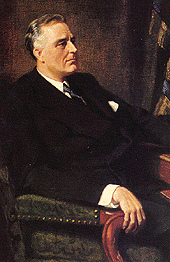 Roosevelt became a public servant partially as a result of his cousin, Theodore Roosevelt, although he took his seat on the other side of the political aisle. In 1910, Roosevelt became a State Senator in New York. He served in the Wilson administration as Assistant Secretary of the Navy (1913-1920) and was the vice presidential nominee for the Democrats in 1920.

Tragedy struck in 1921, when Roosevelt contracted polio, losing the full use of his legs for the remainder of his life. Roosevelt persevered, gaining limited mobility, and appeared at the 1924 Democratic Convention on crutches to nominate his friend, New York Governor Al Smith for the presidency. Four years later, Roosevelt was elected as Governor of the Empire State.

Coming to the presidency at the height of the Great Depression, Roosevelt assured us in his inaugural address, "the only thing we have to fear is fear itself." He then launched sweeping reform to combat the Depression during his first 100 days in office, creating several "alphabet agencies" and many federal programs to deal with extraordinary unemployment and poverty. It was during these "Hundred Days" that the Tennessee Valley Authority was also established. Roosevelt's legacy in battling the Depression is most clear in the Social Security System.

Roosevelt won his first reelection in 1936 and, armed with what he felt was a popular mandate, he set out to broaden the scope of the presidency. He suffered a major political failure when his plan to expand the Supreme Court was beaten back by Congress, although Roosevelt was victorious in changing the shape of the Court as a result. Over his tenure, Roosevelt appointed nine justices to the Court, only two less than George Washington.

With the Second World War getting under way, Roosevelt steered the nation away from domestic issues, transforming it to a foreign policy / war power. He was reelected in 1940 as the nation prepared for war, which would come in December 1941, with the Japanese attack on Pearl Harbor. Much has been made that Roosevelt knew the attack was coming but let it happen to get the US into the war. There is also evidence that Roosevelt knew about the Holocaust in Germany and was powerless to do anything until the US joined the fight. To aid Great Britain and other allies, FDR started the Lend-Lease plan as a temporary measure. In 1942, Roosevelt took the controversial step of ordering the internment of Japanese-Americans in the United States.

As the Second World War drew to a close, Roosevelt was becoming increasingly frail and sick. He had been elected to his fourth term in November 1944. In April 1945, a few months after returning from a conference in Yalta, Roosevelt died of a cerebral hemorrhage in Warm Springs, Georgia. He was laid to rest in his rose garden on the grounds of his estate in Hyde Park.

Despite being universally loved and revered by the American public and the world, Roosevelt was not the most faithful of husbands. Almost immediately after marrying Eleanor, he began the first of several affairs, with Lucy Mercer, Eleanor's secretary. It was Mercer who was with Roosevelt when he died, despite the fact that he had sworn to Eleanor to not see her again after she discovered the affair. From that point on, Eleanor and Franklin enjoyed a "marriage of convenience."

Frankllin Delano Roosevelt is part Estonian. He is related to the original Bozo the Clown!