Most recently, I found myself thinking of her when they did the "dead montage" during the Academy Awards. My mother and I would watch together at times, with the World Almanac between us checking to see how old one of the presenters was or whether that person had won before and when, etc. My mother never really got hooked on the web, but it was made for her. I come by my archival traits genetically. My mother craved information.

Anyway, during the "In Memoriam" sketch during the Oscars telecast, the only speaking acknowledgment came from Paul Newman, who was one of my mother's favorites. She used to say that "he could put his shoes under her bed anytime." Wherever my mother is, I envision it as a place where she is well again, at an age where she was most happy, and is near all of her friends and family who left before her. But my mother, who hated not having a full table of guest, friends and family for any holiday, has surely had dinner with Paul several times since he got there. I won't think about what else might have happened.

It is also nearing Girl Scout Cookie time. Several stories crossed my radar screen recently, every single one making me remember the years my mother served as neighborhood cookie mother and our living room would be strewn with cookie boxes and the freezer would be stocked with Thin Mints, as they were the only cookie that really froze well. And they were her favorite. So again, wherever she is, I'm sure she's having a spirited conversation with Julie and Olave about these egregious sins being committed in this economic downturn. And I feel the pain of those in the last story. If I want a fix of Tagalongs or Samoas, I have to practically go out on the black market at my employer to find them.
I love you, Mom. I miss you. Rest well, you've earned it. But you would have really loved that story about Teresa's daughter. But I'll tell it to Bill and he'll make sure it gets into the family history.
Posted by Brave Astronaut at 7:53 AM 3 comments:

Email ThisBlogThis!Share to TwitterShare to FacebookShare to Pinterest
Labels: About Me, Family

Today was the finals of the "Great Gingerbread Bake-off" for the lunch table group. For several weeks we were all treated (?) to various ginger bread recipes. The idea was launched in the fall, ground rules were created, NJM was selected as a "control" (she did all of the baking - and Kudos to her for all her hard work). It's possible that by today we were all a little sick of ginger bread. I myself am not a huge fan of the ginger root, but I soldiered on. ADR was noticeably absent for the final tasting today.

So after several selections, here is the winning recipe (It was a close vote 3-2)! It comes from Mrs. OC - I am not sure where she originally got it from.

Ingredients:
Special equipment: a 10-inch (10 to 12 cup) bundt pan (although this batch and all batches were prepared by NJM in a 13x9 glass baking pan).

Bring stout and molasses to a boil in a large saucepan and remove from heat. Whisk in baking soda, then cool to room temperature.

Sift together flour, baking powder, and spices in a large bowl. Whisk together eggs and sugars. Whisk in oil, then molasses mixture. Add to flour mixture and whisk until just combined.

Pour batter into bundt pan and rap pan sharply on counter to eliminate air bubbles. Bake in middle of oven until a tester comes out with just a few moist crumbs adhering, about 50 minutes. Cool cake in pan on a rack about 5 minutes. Turn out onto rack and cool completely.

LBA has a thing for croissants. I think he would eat them every day for breakfast. Is it the butter?

When I first saw this recipe on Cheverly Chef Scott's blog, I thought he had used Milk Duds in it, but he corrected me - they're bittersweet chocolate pieces. Yummy Goodness!
Heat oven to 375° F. Butter an 8-inch square or other shallow 2-quart baking dish. In a large bowl, whisk together the egg yolks, milk, cream, sugar, vanilla, salt, and nutmeg. Add the
croissants and chocolate and mix to combine.

Transfer the mixture to the prepared baking dish and bake until set and a knife inserted in the center comes out clean, 30 to 40 minutes. Serve warm or at room temperature.

Make-Ahead Tip: Cut the croissants and chop the chocolate, then store them at room temperature in separate resealable plastic bags for up to 1 day.

Note: Scott followed this recipe up with one for caramel sauce, which would go well with this.
Posted by Brave Astronaut at 10:05 PM 4 comments:

Where I Am Tonight AND Who I Am With 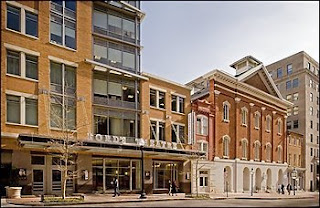 As I have reported here before, I am a volunteer usher at Ford's Theatre, here in Washington DC. The highlight each year is, of course, the gala that is held each year, which draws the cream of Washington politicians, and the President of the United States. Tonight the theater will have its grand reopening celebration and the 44th President of the United States, Barack Obama, will be in attendance. It is an event I have been waiting four years for. My previous three galas have been celebrated with the 43rd President and I am very excited to be in the same room as our new President.

Ford's has undergone a major renovation and has only just reopened. I was in attendance last Friday night for a preview performance of "The Heavens are Hung in Black," the first play of the 2009 season. It stars David Selby as President Lincoln and takes place in the months between the death of Lincoln's son, Willie, and the issuance of the Emancipation Proclamation. You can read a review of the play here and you can read more about the renovation of the theater here.

Tonight's celebration will feature performances from James Earl Jones, Jessye Norman, Joshua Bell, Jeffrey Wright, and Kelsey Grammer. Richard Thomas (John-Boy!) will serve as emcee for the evening and Lincoln Medals will be bestowed upon George Lucas and Sidney Poitier. As I said, can you understand why I have been looking forward to this? A new era of new programming for the gala (read: no more country music!) makes this Brave Astronaut a very happy boy.

And while, yes, the theater did get all new chairs, the entire renovation is amazing. There are now elevators in the building, an expanded lobby, with a gift shop and concessions. A new museum will open in the late Spring. It is such a grand venue here in Washington. I urge anyone who lives here or is planning on coming to Washington, to make some time to experience a play at Ford's. Perhaps I will even be there to help you to your seat.
Posted by Brave Astronaut at 8:33 PM 2 comments:

Email ThisBlogThis!Share to TwitterShare to FacebookShare to Pinterest
Labels: About Me, Politics, Theater

Picking up on the financial ruin you all are suffering if you didn't eat crepes on Candlemas Day, here's a story that rose to the surface a few months ago. The recession has evidently hit the luxury food market. Here's some "lobster history."
The Brave Astronauts invited our good friend NJM to dinner on Christmas Eve. She was very kind to bring lobster rolls, a traditional meal on Christmas Eve in her family. My family usually had hamburgers and my father's homemade potato chips. Her recipe for lobster rolls appears below.

In keeping with the ever-worsening economy, to make things worse, the sales of champagne are also "losing their fizz." I guess it's good to know that if we are all forced back to church to pray for our financial well-being, there's always good, nutritious "Jesus, bread of life" to eat.

NJM's Lobster Rolls
Hollow out dinner rolls. Mix lobster meat and mayo together so the meat is bound together. Place meat inside the hollowed out rolls. Broil in the over for approximately 5 minutes, just enough to brown the tops and heat the meat through. This amount of meat should yield about 10-12 rolls.

If you ever find yourself on the east end of Long Island, go here and try the lobster rolls. They're fantastic. While the rolls prepared by NJM were absolutely swoonworthy, give me some drawn butter and a whole steamed lobster and you won't hear from me until I'm ready for seconds.
Posted by Brave Astronaut at 8:29 PM 5 comments:

This was created by the venerable archivist, Terry, who blogs here. He created this meme. Here is my own take on it:

Rules: Six categories, with six entries each done in six minutes without Google (I didn't use Google, but I did consult my iPod).

Email ThisBlogThis!Share to TwitterShare to FacebookShare to Pinterest
Labels: About Me, Lists, Meme, Music, Video

I have a bunch of random things that I have been meaning to toss out here. None, on their own, warrant a post alone, so here's the big bucket of Internet goodies.

Email ThisBlogThis!Share to TwitterShare to FacebookShare to Pinterest
Labels: About Me, Food, Fun and Games, Music, Space, The Web

I know, I know. Usually I will use this day to remind people to eat crepes as it is Candlemas Day (You can click on "crepes" and get the recipe - remember to eat crepes or suffer the sadness of financial insecurity for the rest of the year - oh, wait). However, I spotted this blog entry last year a few days after February 2 and loved it so much, I wrote most of this 2009 post on February 3, 2008. It is the day the Giants won the Super Bowl. George Bush is still President, but when this comes out of draft form, he won't be. And yesterday was also Super Bowl XLIII, so congratulations to the six-time Super Bowl Champions Pittsburgh Steelers. Here is an embed to the Super Bowl Ads from yesterday.

So to the topic of Groundhog Day. The blog post that got me going is here. Here's the gist. This person took notes through the course of watching Groundhog Day and believes that Bill Murray's character lived through the same February 2 for 4 years.

These are the days actually seen in the movie:

Now, beyond the days we actually see, much time is implied:

So. Based on evidence presented in the movie, he re-lived February 2 for at least four years.
Posted by Brave Astronaut at 8:11 PM 4 comments: