"Have Your Pets Spayed or Neutered" 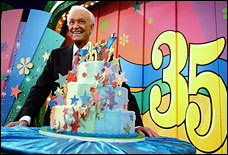 With those words, Bob Barker will leave television this week. After thirty-five years as host of the highest-rated daytime, and longest-running, game show, The Price is Right, Barker is retiring. I suppose it's time. The man is 83! It however makes me sad that I never got to "come on down" and then get to kiss Bob on the cheek. Sorry, folks, the man is a legend, I really might have had to give him a little peck. The closest I came was in two trips to California, unfortunately scheduled at times when the show was not taping - damn Summer break!

CBS will celebrate the man tomorrow night, on May 17, with a prime time show. Be sure to watch, you know you want to.

10. The $100 bill he kept in his pocket. When someone in the opening game bid the exact right price, Bob would reach into his pocket and produce a reward of 100 bucks. So Grandfatherly, so warm. We imagine the bill smells like Werther’s Originals and pipe tobacco.

9. The Most Feminine Microphone in the Biz. It takes a real man to use a long, skinny mic like that.

8. The Ol’ “Let’s Check If You’re A Winner Fake-Out” Trick. Bob waits until the height of anticipation, leans in the hit the revealing button to see if the contestant is a winner, then takes this opportunity to find out where the player is from, how many kids he/she has, etc. The audience groans, and fantastic television is made. This trick is most often employed during “The Dice Game” and “Spelling Bee.”

7. Female contestants kissing Bob on the cheek. We long to feel the leathery creviced surface of his face brush against our quivering lips.

6. His laugh. Sure, most of the time it’s done politely. But ever once in a while, a contestant would catch him off guard, and he would genuinely crack-up.

5. Bob and his Plinko Stick. Back before “modern technology” created a clog-free Plinko board, every now and again one of the oversized purple chips would get stuck between the pegs. Such an emergency forced Bob to retrieve his Unclogging Stick (a long white baton), and finagle the chip from its Plinko prison. And he did it with ease, folks.

2. The Creepy Old Grandpa You’re Glad Isn’t Your Grandpa. You couldn’t compile a list of Bob Barker related memories without bringing up the famous sexual harassment suit brought about by one of his Barker’s Beauties. In a way, it kinda made us love the creepy old dirty bastard, though we were always grateful to keep our Barker-related fantasies filed under “Imaginations Only.”

1. Bob’s Signature Sign-Off. We hate to think of what the future holds for animal population control without Bob’s trademarked sign-off, “Have Your Pets Spayed or Neutered.” Will the new host adopt this phrase? And if so, will it feel completely phony? But what of the animals? Is anybody thinking of the animals?!?!

The Washington Post had a big article in last week's paper about the "cult" of Bob Barker. I would join that cult. As the article talks about, there is a whole generation of Americans who don't know television without him. How many days did you stay home sick from school, making sure that you managed to find yourself on the couch by 11:00am to hear those immortal words, COME ON DOWN!

Oh, did you want archival content? Did I mention he's 83!
Posted by Brave Astronaut at 8:49 AM

Email ThisBlogThis!Share to TwitterShare to FacebookShare to Pinterest
Labels: Television

Here's your M.A.C.: CBS (under the moniker CBS Studios) owns a massive television library [archives] spanning over six decades, including I Love Lucy, The Twilight Zone, The Honeymooners, Hawaii Five-O, Gunsmoke, The Fugitive, Little House on the Prairie, Star Trek, The Brady Bunch, and CSI: Crime Scene Investigation, among others. (from http://en.wikipedia.org/wiki/CBS#CBS_Corporation_and_CBS_Studios) I'm sure there are some clips of Bob floating around somewhere in there.

I'm trying to remember if any of my classmates ever worked for CBS.

I still remember when Johnny Olson died, and how different it was to hear "Come On Down" come out of Rod Roddy's lips instead. The show has undergone many changes - new games, new models - but Bob has been the one constant. Farewell to a TV icon who has been at his job almost as long as I have been alive.

How could you forget to make a comment about the mini-golf game. He would take the putt from as far out as possible to inspire confidence. That's something I can clearly remember.

Hey you need to check out June 29 on the Bowie Baysox calendar - Bob Barker Tribute night...